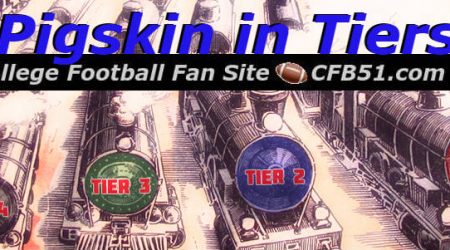 Beginning the season there is always an ocean of rankings being spilled across the screens of every avid college football fan.  It’s just one of those inevitable things that happen, and as can be expected the quality and objectivity varies.

Surely the method is described if any sort of ranking is to be taken seriously.  The one’s that begin where last season ended always make the most sense in my opinion, and once weight has been granted or removed based on the legions of impacts.  Items such as coaching changes, returning starters, travel dates and opponents, stacking of schedule, et al pretty much define the process and offer a reasonable cover of objectivity to those offering the ranking. 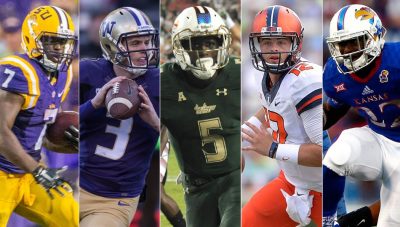 We all pretty much live in an echo chamber where we can seek support for our pre-conceived notions, and though this seems to be the case of politics lately, it is certainly not a new practice.  It has not only lived but thrived in these early season promotions since way back in the day of raiding magazine aisles in the local grocery store as if the contents were life sustaining ingredients to an impending odyssey.  And… we armed ourselves with such believing it offered protection against the unknown.

Personally, I spent years collecting this data as if I were some sort of Marine Raider on a South Pacific beachhead gaining information on enemy movement and positioning just forward of a division sized amphibious landing operation.  It took me years of observation to notice the consistency of the major publications that usually laid out the ‘importance’ of early season matchups (ala “#1 vs #4!!!!”), and therefor driving interest in those games for those networks.  Discovering this… It was akin to finding with zero reasonable doubt that Santa was bull shit.  The rankings provided a certain meeting of top five ranked opponents every single season.   There was always a program present that had no business being in that company.

At any rate, the curiosity to me when encountering these promotions, as it’s more honest to call them what they are, is to determine which angle of approach the drafter is assuming.   There seems to be two major camps.  One camp seems to follow the safety of last season’s finishing lineup, and the other seems to follow a formula that can be described in short by “how the drafter believes ‘they’ (the programs) will finish”, which is to say #1 is “where they are” and #2 is “Where they’ll finish”.  You can guess either takes skill and research and no short amount of boldness to put a name onto a supposition, but you can also see where playing it safe knowing it impacts the weight your  next season’s “pre-season poll” and how it will be received.

Playing it safe; there is nothing sexy about that.  Well, there is if it’s “your” reputation, I guess, but… it ain’t gonna bring folks around.  I reckon the purpose of all this prose is to deflect the safety I’m about to assume by ‘playing safe’.

It’s a simple concept.   We know who is elite based on factors used to weigh who we already know has their act together.   There is nothing groundbreaking about this.  The only question becomes “where is the cutoff?” … To that, well, it depends.   The hedge is the encoding of the tier and the weight the team carries and can be seen as a color code- and it’s simple.  Using ‘stop light’ mentality, each tier is broken into “Red, Yellow, or Green” .  Counterintuitively,  the Red zone is a good thing- it denotes ‘firmly entrenched’, whereas ‘Green’ indicates “Oscar Mike- aka On the Move”.   Yellow is in limbo and could go either way.

As one would also imagine, the top tier is smaller than the second.  The second is smaller than the third.  The third is smaller than the fourth.  In the universe of college football, there may as well not be a fourth- it is the realm of squatters and perineal no-shows.   Fans of schools in the fourth tier deserve not only respect, though, but regard.  It isn’t easy to be a fan or to maintain a level of knowledge and interest of the games finer points while a member of tier four.  Don’t ask me how this knowledge came my way.   True fans of the game- those that are bound by the mechanisms and prospects- comprise fans of the fourth kind.  Emotional and arrogant idiots comprise the bulk of the first kind.  Sorry, but this is true.  This isn’t to say there aren’t true fans in all of the ‘kinds’, but the pure numbers of body painted zealots who will change their colors for another in a heartbeat  are heavily favored in the top tier.  Whoops- this has been a tangent, and for which I offer apology.

Enough of that – Let’s get down to brass tacks here.

Exit from a tier cannot be caused by a team of greater or equal tier beating you.  Gaining ground is done by beating someone better, while losing ground is by being defeated by a team heavily under-dogged and from a lower tier.

Prior to the “impact of weights”:

Last year was – f u n k y-.   The winner of the championship wasn’t even supposed to be there, but they handled the prior #1 team with relative (and believe me ‘relative’) ease.  They played the team they had just beaten the team that beat them (dang that was winded) for the SEC ring, albeit taking overtime to do so, to win the national championship.  That team had just played the team with the Heisman Trophy winner, and had required the use of extended playing time to do so as well.   In this happenstance lies the problem, but also the resolve. 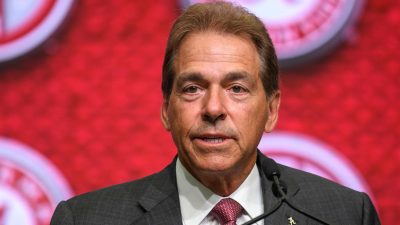 Alabama deserves to be in the top tier regardless of how folks want to dish on them, but beating UGA in overtime (yeah yeah, 2/26!!! Blah blah) didn’t award them decisively better than UGA.  Likewise, UGA beating OU in overtime didn’t place them considerably higher than OU.  The ruling here is: “If a team doesn’t demonstrate mastery of another by more than one scoring opportunity at the end of regulation, they really aren’t that much better” applies.   This lands four teams in the top tier beginning this season prior to the impact of weights.

Prior to weight Tier One:  ‘Bama, Oohga, Tigers of the Clemson variety, and Oklahoma- riding the overlap is Ohio State, Wisconsin, Penn State,  and Auburn.

Tier two, prior to weight,  is somewhat clear as well, and defined by those who just missed the opportunity last season yet who were obvious to just outside being contenders (read: they didn’t benefit by playing patsies all year).   Composition: TCU, Notre Dame, USCw, Miami, oSu, Michigan State, Washington, LSU, MissSt, Stanford, NCState,  Virginia Tech and Memphis…

Prior to weight Tier Three:  Just about everyone else, with a couple notables who are poised to move- though that is ‘after weighting’ to be fair.  USCe, Virginia, Texas, Florida, and Boise State are sitting in the red of tier three. 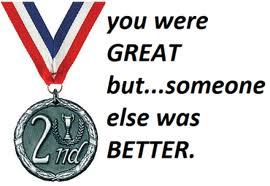 So let’s discuss weighting and see what kind of weights you guys offer up in the comments/forum as well (found here).

Alabama lost their DC, but we know they reload not rebuild.  They are still the standard of judgement.

OU lost their star QB and several contributors in an unlikely first season of a new HC, and who was running Stoops ponies.  Though the stable is still formidable, they aren’t completely as they were last season.  They get bumped to the ‘red’ in tier two due to this improbability.

UGA lost some serious Horsepower taking up positions behind the OL.  They also have some young hungry stallions to take those seats.  Their unbelievable QB play returns for his second season and all eyes will be on him.  The coaching remains superb.  They are firmly parked in the yellow with upward mobility by any reasonable expectation.

tOSU is in limbo with their coach under fire.  Will the distraction impact on the field?  TCU and PSU offer opposition early in the season likely before the Bucks find their way through the dark and by themselves if in fact it’s sans Meyer.

Clemson is holding steady and likely every bit as good as ‘Bama except just a little light on the bench.

The remainder of the prior mentioned tier one contestants is decidedly Oscar Mike- green as can be.  Wiscy is solid but possibly lacking required tools, PSU doesn’t have all the questions answered, and Auburn has some mystery.

Weight on the second tier becomes mucho cloudier.  Movers are quite possibly USCw, who has a badass backfield coming into the season, Stanford, who seems to have some ponies, TCU, who will have a chance to present their case early, Miami who is on upward trajectory under Richt, and Michigan State who has quietly arranged a run with the right components. 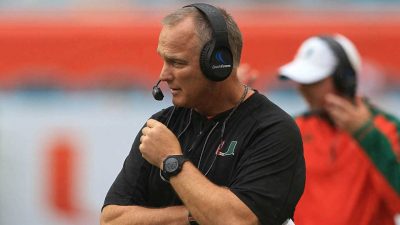 I am confident the next National Champion will come from these teams if not all four ‘playing for it in the end’ already offered up.

Through the season there will be teams appear from lower tiers as and while upper tiers drop.  Some will make a run and a strong case ~ mostly via sympathy that “our league/schedule isn’t our fault” and attempt to politic their way in.   It doesn’t matter, though.  There are but four tiers, and though the bottom one will swell, by the end of the season the top one will collapse to but four.

Watch the tiers, y’all.  The rest will work itself out.

comments on the forum linked here