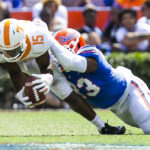 Florida’s eight-game winning streak, tied for the program’s longest since 2008.

Florida: DE Jonathan Greenard is tied for the SEC lead with 5 ½ tackles for loss and ranks second in the league and 19th nationally with 3 ½ sacks.

Florida’s running gave vs. Towson’s run defense: If the Gators are ever going to have a chance to get the ground game going, this is it. Towson has not been able to stop anybody’s ground game this season, and this is coming against FCS opponents. If the Gators can’t run on this defense, maybe it’s time to abandon the running game and turn the offense over to the Gators’ strength — Trask and the talented and deep set of receivers. The Tigers are giving up more than 200 yards a game on the ground, so many this is the day Lamical Perine, Malik Davis and Dameon Pierce will have some daylight to run through. If the Gators can establish the run, Trask and his receivers could produce a big day, a pressure-free day, in the passing game.

• Florida’s offensive line versus Towson’s defensive front. The Gators have yet to really control the line of scrimmage, struggling to run the ball against everyone — even lower-division Tennessee-Martin. Florida ranks 12th in the SEC and 91st in the nation in rushing, an area that needs improvement before facing heavyweights Auburn, LSU and Georgia.

Towson is getting $500,000 to make the trip from Baltimore, the kind of payday that helps fund its entire athletic department. … Towson leads the Colonial Athletic Association in takeaways (12) and turnover margin (plus-9). … Towson is ranked 10th in the FCS coaches’ poll. … Towson’s only other games against an SEC opponent came in 2012, a 38-22 loss at then-No. 3 LSU. Towson is looking for its first victory over a team from the Football Bowl Subdivision since beating Connecticut 33-18 in 2013. … Florida is 4-0 against ranked FCS opponents, having beaten No. 14 Eastern Kentucky (2014), No. 24 Furman (2011), No. 2 Appalachian State (2010) and No. 1 Furman (1990). … The Gators have thrown for at least 300 yards in three straight games, the first time they’ve accomplished that feat since 2002-03. … Florida is playing its second FCS opponent this month. The Gators beat UT-Martin 45-0 on Sept. 7.  … The Gators have won eight consecutive games.

Towson not so tiny

Most of the nation will view this matchup as a giant mismatch in Florida’s favor. It very well may turn out that way, but the Gators are expected to be tested today, especially by the Tigers’ offense, which is balanced and potent. Towson, which is ranked 10th in the FCS, is averaging 40 points and 423.8 yards a game — 147.8 rushing and 276.0 passing. The Maryland school scored 45 points last Saturday in an overtime loss to Villanova. This is an offense that will challenge UF’s injury-depleted defense. The Gators need to stay alert — and stay healthy — because the Tigers have the ability to create explosive plays.

The Tigers are led by quarterback Tom Flacco. Yes, he’s the younger brother of veteran NFL quarterback Joe Flacco, who is now the starter for the Denver Broncos. Tom Flacco is more of a dual-threat quarterback than his older brother. In the Tigers’ 52-45 overtime loss to Villanova last Saturday, Flacco threw for 304 yards, rushed for 110 and accounted for two touchdowns. The Gators will try to bring steady heat against Flacco, but they’re going to have to stay disciplined and in their lanes or run the risk of getting burned by Flacco.

The Gators, who have consistently struggled in the passing game since Tim Tebow’s departure after the 2009 season, have suddenly taken flight. UF has three 300-yard passing games in a season for the first time since 2009. In Dan Mullen’s 17 games at UF, the Gators have produced four 300-yard passing games, two coming against SEC opponents. In the 101 games from 2010-17, the Gators combined to have only six 300-yard passing games. UF has a good chance to go over 300 yards again today. Kyle Trask has a hot hand and the Tigers have been giving up lots of yards and plays with their leaky secondary.

• Going against a defense that surrenders 201.5 rushing yards a game, can the Gators finally get their running game going?

• After turning the ball over three times against Tennessee, will the Gators take care of the football against a team that is plus-nine in turnover margin?

• The Swamp was loud and alive for last week’s game against Tennessee. What will the crowd be like today? And will the Gators come out flat or fired up?

• How many true freshmen will see playing time for the Gators?

HBO Sports is going behind the scenes with the football programs at Florida, Arizona State, Penn State and Washington State for four episodes of its “24/7” documentary series.

HBO will run an hour-long episode for each team, starting at 10 p.m. Wednesday with Florida’s preparation all week for Towson. The Penn State episode will debut Oct. 9 and chronicle the Nittany Lions’ preparations for Purdue on Oct. 5.

The series will be narrated by Liev Schreiber, who is also the voice of HBO’s popular NFL training camp series, “Hard Knocks.”

Mark Long of The Associated Press contributed to this report.