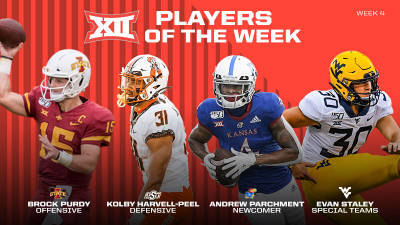 Two juniors and two sophomores garnered Big 12 accolades for their performances during Week 4. The award honorees are selected by a five-person media panel.

Purdy broke ISU’s school record for total offense in a game with 510 yards, registering 435 yards through the air and 75 yards on the ground in the Cyclones’ victory over ULM. The sophomore is the first player in Big 12 history with 400 passing yards, three passing touchdowns and three rushing touchdowns in the same game.

Harvell-Peel was credited with a forced fumble, a fumble recovery and an interception in Oklahoma State’s six-point loss at Texas. The sophomore finished the contest with nine tackles.
Staley registered a season-high three field goals in the Mountaineers’ win at Kansas. The junior hit a season-long field goal of 44 yards, while also connecting from 22 and 37. He averaged 62.8 yards per kick off in six attempts, resulting in four touchbacks.

Parchment recorded his second-consecutive 100-yard receiving game with 132 yards on five catches. He hauled in a career-long 75-yard scoring touchdown in the third quarter and put KU within one score of West Virginia in the final minutes of the game with his second touchdown.

All four of this week’s winners are first-time honorees for their respective awards.