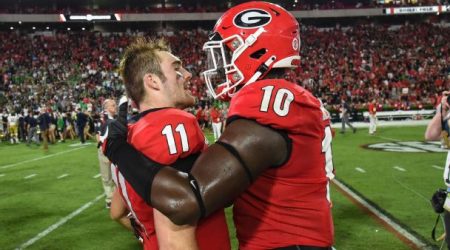 He was there on the sideline in South Bend, Indiana, two years ago when the then-true freshman quarterback made his first career start in place of the injured Jacob Eason in a primetime matchup of top-25 teams. What he saw next was a blend of poise and efficiency and confidence, Kelly recalled, as Fromm led the Bulldogs on a late fourth-quarter drive that ended in the game-winning field goal. Summing up what would become perhaps the defining trait of Fromm’s career, Kelly said, “He wasn’t afraid of the moment.”

On Saturday — this time in Athens, this time in a battle of top-10 teams with playoff aspirations — Kelly stood on the sideline and watched Fromm do it all over again. It didn’t matter that Notre Dame held Georgia to 34 total yards in the first quarter. It didn’t matter that its twisting defensive line helped limit Fromm to just 59 yards passing in the first half. When it mattered most, with his team trailing at halftime, the freshman-turned-star-upperclassman stepped up.

In front of 93,246 mostly nervous fans, there was no hesitation from the junior QB out of Warner Robbins, Georgia. With 6:20 remaining in the third quarter, Fromm, who had completed exactly one pass of 10-plus yards, planted his back foot and ripped a 19-yard pass to Demetris Robertson. Then he found Brian Herrien for a gain of 12. Then he hit up Lawrence Cager for a quick five yards. The drive ended in a go-ahead field goal, and the tone was set.

The next possession, in the fourth quarter facing third-and-7 on the Notre Dame 15-yard line, Fromm settled in to take the shotgun snap and surveyed the situation. Right away, he knew the defense was in Cover Zero.

The pressure came fast from the rushing linebackers and Fromm threw the football just in time. It went right at the pylon, right at the back shoulder of Cager, who corkscrewed his body and got one foot down just before landing out of bounds. The ref signaled touchdown. The football gods called ballgame.

Afterward, Kelly couldn’t help but be impressed. Fromm’s arm was a lot liver than he remembered.

It wasn’t just that Fromm hit Cager over-and-over again with those difficult back-shoulder passes, Kelly said. It was how he did it. It was how Notre Dame played on the hip of receivers to take those exact kinds of throws away, and he made them anyway.

“They weren’t in stride, running, back-shoulder catches,” Kelly explained. “They were, they-have-to-go-down-to-the-ground-to-make great catches. [Troy Pride is] a pretty good defender, and he didn’t have much of a chance. So that’s really good quarterback play.”

You might look at a night completing 20-of-26 passes for 187 yards, one touchdown and no interceptions and shrug. You might compare it to the eye-popping statistics of a Tua Tagovailoa or a Jalen Hurts and ask, “What’s the big deal?” But you’d be missing the point.

As Robertson explained, you have to judge Fromm within the confines of his offense, which doesn’t ask him to throw the ball 40 times a game. You have to look at his accuracy, his decision-making, his leadership. Fromm has completed 66.1 percent of his passes during his career and has thrown for 60 touchdowns and only 13 interceptions. His career record is 27-5, and that doesn’t include the game he came off the bench in the first quarter against Appalachian State two years ago.

“Nothing rattles him,” Robertson said.

During his opening post-game remarks, Georgia coach Kirby Smart told reporters, “You don’t really know what’s inside you, in life or in football, until you get tested.”

And in the case of Fromm, he’s been tested time and time again. Fromm has started 13 games against AP Top 25 teams, second only to Jalen Hurts among active quarterbacks, and during those games he’s thrown 22 touchdowns and seven interceptions, with a 78.6 Total QBR vs. ranked teams, 6th-among active QBs with at least 5 such starts.

Smart said he thought Fromm managed the game “beautifully” on Saturday night and showed guts running the football, bouncing off tackles. If anything, Smart was disappointed the staff didn’t put Fromm in position to take control of the game and make more decisions on his own.

“Jake takes things that are broke and fixes them,” he said. “He makes wrong right. I’m glad he’s on our team because he’s a leader, he’s a commander-in-chief.”

After the game, Fromm dapped up D’Andre Swift on the way to meeting with the media, thanking the running back for his hard-fought 98 yards and a touchdown on the ground. But it was Swift who wanted to talk about his quarterback’s play.

What it boiled down to, Swift said, was Fromm’s “resiliency” and how he kept the team up coming out for the second half. Then there were the checks he made at the line of scrimmage to get them out of bad plays.

“They don’t see him in the study room, in the film room studying at whatever time of night,” Swift said. “But we appreciate that and appreciate what he does for our team.”

Fromm enjoyed the win, though. He relished the atmosphere inside Sanford Stadium, whose strobing LED lights gave the game a concert feel. The ear-piercing noise from the crowd was felt from start to finish, causing Notre Dame to commit six false start penalties.

If he was forced to choose, Fromm said he’d take this win against Notre Dame over the one two years ago.

That version of Jake Fromm was just coming into form. But this version is a fully-formed quarterback leading a team intent on finally taking down Alabama to lay claim to not just the SEC but all of college football.

“We needed a little bit of adversity,” Fromm said of facing Notre Dame. “We got it.”