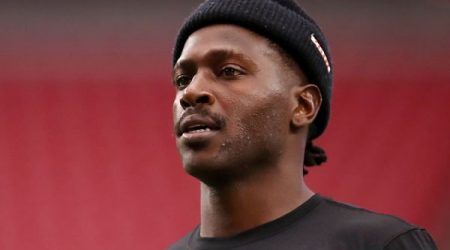 FOXBOROUGH, Mass. — The attorney for New England Patriots wide receiver Antonio Brown said the player denies a claim of sexual misconduct with a female artist who was working in his western Pennsylvania home in 2017.

Antonio Brown has reviewed the sexual misconduct allegations made by an unnamed artist included in a recently published Sports Illustrated article and denies that he ever engaged in such activities. There will be no further comment at this time.

The allegation was part of a Sports Illustrated report that detailed domestic incidents involving Brown, a charity auction theft and multiple unpaid debts.

The report comes in the wake of ESPN’s Jeff Darlington reporting that Brown declined to sign a $2 million-plus agreement with his former trainer Britney Taylor to settle a sexual assault allegation.

The NFL was scheduled to meet with Taylor on Monday as part of its investigation into the matter, sources told ESPN.

According to the Sports Illustrated report, Brown had hosted a charity softball game in Pittsburgh to benefit the National Youth Foundation, a Pennsylvania-based volunteer group of women that promotes inclusion and gender equality, as well as developing academic skills in kids. The event had an auction that included artwork, and Brown agreed to purchase a portrait of himself before befriending the artist who created it.

Brown invited the artist to come to his home to create another painting of him, according to the report, arranging for transportation from New York to western Pennsylvania. The artist told SI that she was thrilled by Brown’s willingness to share her work on social media, but on her second day, things changed.

According to the report, which did not include the artist’s name, the artist “was in a kneeling position while painting and turned to find Brown behind her, naked, holding a small hand towel over his genitals.” The artist said she didn’t stop painting and that “after that, it all ended abruptly.”

Brown paid her $2,000, according to SI, and didn’t contact the artist thereafter.

The artist is not pursuing charges or remuneration, according to SI, but said that friends with whom she had shared the experience pointed out the lawsuit Taylor filed against Brown last week.

Requests for the $700 payment for the original auction painting have gone unanswered, the National Youth Foundation and the artist told SI.