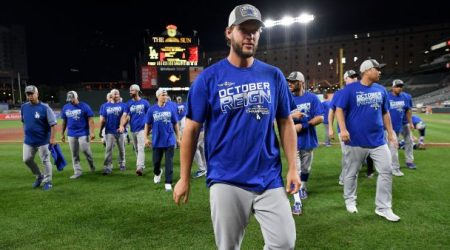 It seemed like the oddest of places to celebrate a seventh consecutive National League West title: At Camden Yards, against a bad Baltimore Orioles team, the Los Angeles Dodgers celebrating with a group photo in blue “October Reign” T-shirts and the B&O Warehouse in the background.

Justin Turner sat on the ground in the middle of the congregation Tuesday night, holding up seven fingers. He has been with the Dodgers for six of the division crowns — Clayton Kershaw, Kenley Jansen and Hyun-Jin Ryu are the three holdovers from the 2013 team that initiated this run — and in many ways Turner is the perfect symbol of how the Dodgers have built this dynasty.

The Mets had non-tendered Turner after the 2013 season, and he inked a minor league deal with the Dodgers with an invitation to spring training and a $1 million salary if he made the big league club. He was merely insurance at second base when he signed in early February 2014, a backup plan if either Alex Guerrero — remember him? — who had just signed out of Cuba for $28 million, or prospect Dee Gordon didn’t work out.

Turner, of course, had started to revamp his swing, and he hit .340 that first season with the Dodgers. He became a star, with top-10 MVP finishes in 2016 and 2017, and he eventually would earn a much larger payout with a four-year, $64 million contract.

Turner actually was a Ned Colletti signing, as Andrew Friedman took over as head of baseball operations following the 2014 season. So give the Colletti front office some credit for this run of division titles: It was under him (and scouting director Logan White) when Kershaw was a first-round pick in 2006 and Jansen was converted from a weak-hitting catcher to a fireball-throwing reliever.

Turner, however, exemplifies how a roster of stars has been developed in a variety of means. Yes, money helps and the Dodgers have spent a lot of it, but consider the following:

• Max Muncy, like Turner, was free talent, cut loose by the A’s, and he has blasted 68 home runs over the past two seasons. Muncy is ninth in the majors in wOBA during that time frame.

• MVP candidate Cody Bellinger was a fourth-round pick in 2013 (oh, that was Colletti and White, as well).

• Walker Buehler, who tossed seven scoreless innings with 11 strikeouts in Tuesday’s win, was a first-round pick; but as just the 24th overall selection in the 2015 draft, it was a stroke of genius as the Dodgers took a chance after he came up with a sore arm at Vanderbilt.

• Chris Taylor was acquired from the Mariners in a trade for pitcher Zach Lee, who never even pitched for Seattle.

• Kenta Maeda came over from Japan, and he has been a vital member of the rotation over the past four seasons.

Above all, the key under Friedman has been player development at the minor league level.

The 2016 draft has a chance to become legendary, as Gavin Lux, Will Smith, Dustin May and Tony Gonsolin all were drafted that year, reached the majors this year and have a chance to make the postseason roster. (Smith, definitely; the other three, maybe.) It’s amazing: A team that just reached two straight World Series came up with four rookies of this caliber the very next season. (Alex Verdugo also has rookie status, although he debuted in 2017.) That’s how you win seven division titles in a row.

Don’t underestimate the impressive nature of this achievement. Here’s the list of teams that finished in first place seven consecutive seasons:

*Some will credit the Braves with 14 straight division titles, choosing to skip the 1994 strike season; the Braves were in second place at the time of the strike.

That’s it. Three times. The 1995 to 2001 Indians won six in seven years. The Yankees’ dynasty from 1949 to 1964 included an incredible 14 AL pennants in 16 seasons but had a high run of five in a row. (Granted, that was before divisions, so they had to beat the entire league.) The 2007 to 2011 Phillies won five divisions in a row. The Big Red Machine of the 1970s is considered one of the greatest teams of all time; those Reds topped out at two division titles in a row.

So, yes, this is a monumental run of excellence for the Dodgers. No, it’s not simply because of money. The Yankees will win the AL East this year — their first division title since 2012. The Red Sox have won four World Series since 2003 — and finished in first place just five times.

Of course, mentioning those World Series championships gets us to how a lot of fans — even Dodgers fans — might feel about this seventh title: Show me a ring.

That’s unfair. For one thing, it devalues the regular season we all spend countless hours consuming, enjoying and celebrating. For the players and everyone else in the organization, a division title is extremely important, the first goal every team has when spring training begins. Just look at the celebration and tell the Dodgers this doesn’t mean anything. That’s an insult to all the work they’ve put in and all the games they’ve won.

This is the first step to the ultimate goal: the Dodgers’ first World Series title since 1988.

While it’s unfair to say this division title doesn’t mean anything, it is fair to suggest that following this seventh title and after two consecutive World Series defeats, the Dodgers will enter the postseason with more pressure and expectations on them than any other team. But that’s a discussion for another time. If you’re a Dodgers fan and didn’t enjoy the celebration in Baltimore because only the October tournament matters, than I don’t know what to tell you. The journey is the joy.