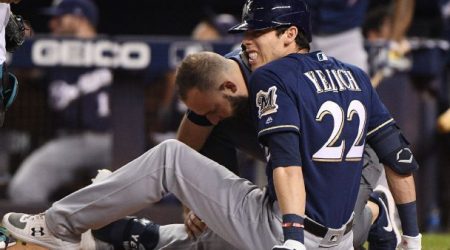 Terrible news from Miami, where the Milwaukee Brewers beat the Miami Marlins 4-3, but announced after the game that Christian Yelich will miss the rest of the season after breaking a kneecap on a foul ball in the first inning. The freak injury came on a 1-1 slider from Elieser Hernandez that Yelich fouled off the top of his right knee. He crumpled to the ground and lay there for a couple minutes before walking off under his own power, but grimacing in pain as he retreated into the clubhouse.

It’s a devastating injury for the Brewers, who lose not just their best player, but a player who had a chance to win his second consecutive National League MVP award, as Yelich’s season ends with him batting .329/.429/.671 with 44 home runs and 30 stolen bases. His combination of hitting with power, hitting for average and thievery on the bases has made him one of the most exciting players in the sport the past two seasons, an obvious fan favorite in Milwaukee but also one of the faces of the game as a superstar slugger.

The Brewers began the night two games back of the Chicago Cubs for the second wild-card berth and pushed across the winning run in the top of the ninth. Trent Grisham, Yelich’s replacement in the lineup, contributed a key double. With closer Josh Hader unavailable, Drew Pomeranz worked around two hits in the bottom of the ninth for his first save.

General manager David Stearns commented after the game on the crushing loss:

David Stearns with the news that Christian Yelich has suffered a fractured right kneecap: pic.twitter.com/HxMVzccDxJ

Lorenzo Cain said Christian Yelich had tears in his eyes after learning his kneecap was broken, understandably so: pic.twitter.com/MO6dyvsYOk

The Brewers are already playing with an injury-riddled lineup. Standout rookie second baseman Keston Hiura, second on the team in OPS, has been out since Aug. 30 with a hamstring strain. Mike Moustakas, who pinch-hit on Tuesday, has had just seven plate appearances since Aug. 26 due to a wrist injury. Cain (knee) and Ryan Braun (back) have been playing through injuries.

Somehow, the Brewers have nevertheless won five in a row — including the final three games of a four-game series against the Cubs — and eight of their past 10. There’s not much solace here, but Yelich has missed time this year with recurring back problems and the Brewers are 10-7 when he doesn’t start (11-7 if you count Tuesday’s win). The Brewers also have the easiest remaining schedule of the NL playoff contenders as they have only one series remaining against a playoff contender (this weekend at St. Louis). They have two more games in Miami and, after the Cardinals series, finish up with the Padres, Pirates, Reds and Rockies.

Still, a makeshift lineup will now be even more makeshift. Travis Shaw started at third base on Tuesday and he’s hitting .151. Cory Spangenberg started at second and he has a .273 OBP. Hernan Perez played shortstop and he has a .276 OBP. Cain is hitting just .253/.321/.353. Without their MVP candidate, and minus Hiura and Moustakas, you have to wonder where the runs will come from. At least the Brewers have some depth in the outfield with Grisham — who has hit .263/.324/.455 in 33 games — and Ben Gamel, but they’re not going to come close to Yelich’s production.

This Brewers team has found a way to overcome adversity, however. Last year, they won their final seven games and nine of their final 10 to force a tie with the Cubs for the NL Central title and then beat the Cubs in the tiebreaker game. This year, they’ve had to overcome the struggles and injuries in the rotation. Jhoulys Chacin, who started that tiebreaker game a year ago, went from staff ace to getting released in late August with a 5.79 ERA. Brandon Woodruff, their best starter this season, has been out since July 21 with an oblique injury. Corbin Burnes was supposed to be a key part of the rotation, but he’s 1-5 with a 9.00 ERA. Then there’s reliever Jeremy Jeffress, an All-Star last season who was recently cut loose as well.

Somehow the Brewers have fought through all of this and remained in the playoff race. They’re going to need Grisham or Braun or Eric Thames to get on a roll. They need Moustakas back ASAP. Manager Craig Counsell showed restraint in not using Hader on Tuesday after he had pitched Saturday and Sunday against the Cubs, but he’s probably going to have ride the dominant lefty a little harder these final two-plus weeks.

On paper, the Brewers have little chance. They’ve been outscored on the season, their best player is down, they have ground to make up and precious little time left. But don’t count them out:

The mood in the #Brewers clubhouse was predictably muted. But that didn’t stop a number of players from cheering a Cubs throwing error that allowed the Padres to take a 4-2 lead in San Diego with the game playing on the TVs.

As they say, in baseball, anything can happen.