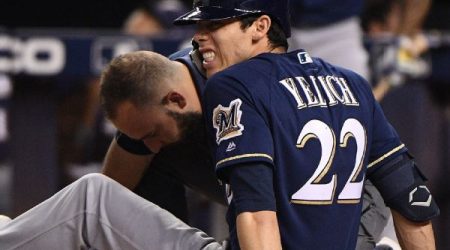 MIAMI — Milwaukee Brewers star Christian Yelich has been forced to leave the game at Miami after fouling a ball off his right knee.

Yelich limped off the field in the first inning Tuesday night. There was no immediate report on the extent of his injury.

Yelich remained on the ground for several minutes before he reached his feet.

The outfielder was the NL MVP last year. Yelich began the day batting .330 with 44 home runs and 97 RBIs for the playoff-contending Brewers, and led the majors in slugging percentage and OPS.

Trent Grisham continued Yelich’s at-bat and struck out. Grisham stayed in the game in right field.

The Brewers entered the night two games behind the Chicago Cubs in the race for the second wild card.

Information from The Associated Press was used in this report.