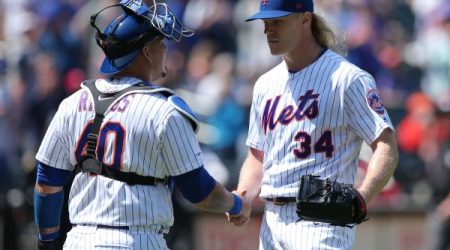 New York Mets ace Noah Syndergaard downplayed a report that he was “livid” over having to throw to catcher Wilson Ramos during his start on Sunday and said his bad splits with Ramos at catcher are “on me.”

The New York Post reported on Monday that Syndergaard had confronted manager Mickey Callaway and general manager Brodie Van Wagenen over Sunday’s decision and has implored the team to let him pitch to another catcher.

“The whole idea that we had a ‘livid’ — or I was livid — conversation was completely false,” Syndergaard told reporters on Tuesday. “We had a very cordial and adult conversation about the matter.

“As far as Wilson, nothing but respect for the guy and it doesn’t change our relationship…he busts his a– everyday, I have ultimate respect for him. My only main concern was just having open dialogue with (the) front office and coaching staff.”

Syndergaard has a 5.09 ERA throwing to Ramos in 18 games and a 2.45 ERA with Tomas Nido in 10 games. The right-hander is 10-7 with a career-high 4.06 ERA overall in 28 starts this season. His name was mentioned in trade speculation as the July 31 deadline approached.

Syndergaard said Tuesday that “as of right now” he doesn’t have an issue with who catches him.

“My initial frustration and why there were extreme splits with different catchers, more so of the matter is, it’s all on me. I’m just trying to look for the answer,” Syndergaard said. “…There’s a certain it factor, there’s a relationship — a symbiotic relationship — that (pitchers and catchers) can possess and it’s all about being comfortable out there.”

Syndergaard can be a free agent following the 2021 season. Ramos signed a two-year, $19 million contract as one of Van Wagenen’s free-agent acquisitions in his first offseason since moving from being an agent to New York’s front office.

Van Wagenen said on Monday that he respected Syndergaard for sharing his feelings.

“We listened to him, he understands our thought process that he may have other catchers catch him,” the first-year GM said. “No different than he has earlier in the course of the season and we’ll continue to make those evaluations on a day-by-day basis that gives us a chance to win.”