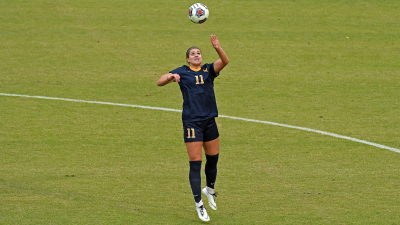 TCU takes over as the league’s highest-ranked team, rising to No. 17 after a two-win weekend. The Horned Frogs have ridden a five-match win streak, the longest streak in the Conference, to a 5-1 overall record. TCU has earned back-to-back Big 12 Freshman of the Week honors, with Gracie Brian and Grace Collins each garnering their first-career weekly awards.

Kansas slipped to No. 18 after going 1-1 over the weekend, including a 1-0 defeat to DePaul and 2-1 victory over Purdue. The Jayhawks also boast a 5-1 record on the year and own one of the Conference’s two wins over a Top 25 ranked team.

West Virginia finds itself in the Top 25 for the fourth-consecutive week, the only Big 12 team that has been ranked in each installment of the USC poll. The Mountaineers climbed to No. 23 after they tied former No. 8 Penn State on Friday, Sept. 6 in their only action of the weekend. WVU sits at an even .500 clip, 2-2-1 overall, and will face No. 15 Georgetown on Sunday, Sept. 15 in the league’s only top-25 matchup of the upcoming weekend slate.

Texas Tech, Oklahoma, Baylor and Oklahoma State all received votes, making it the second-consecutive week that the Big 12 has seen seventy percent of its members ranked or receive votes.