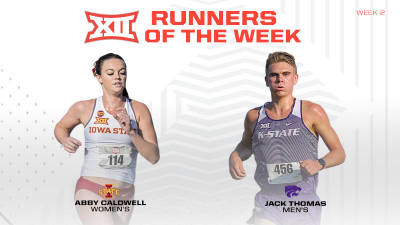 Abby Caldwell of Iowa State and Jack Thomas of Kansas State were named the Big 12 cross country runners of the week for their efforts during the second week of the 2019 season.

Caldwell took home an individual win in the Women’s 4K at the Hawkeye Invitational with a 14:02 mark, leading the Cyclones to a second-place finish as a team. A late push down the stretch of the race saw Caldwell grab the individual victory by three seconds over the second-place finisher.

In his collegiate cross country debut, Thomas clocked in with an 18:51.6 time in the Men’s 6K at the JK Gold Classic, good for a sixth-place individual finish. The K-State men took second place overall in a 15-team meet, thanks in part to Thomas’ efforts.