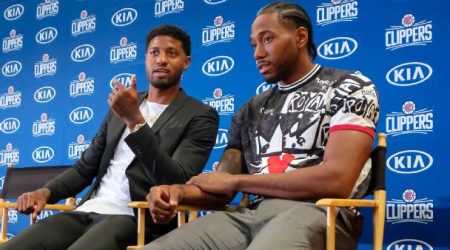 Last season, the Golden State Warriors received every first-place vote available when we asked the ESPN NBA forecast panel for the most likely team to win the NBA title. This year, four teams received at least one first-place vote. This is going to be a different season than what we got used to under the Warriors’ dynasty.

The LA Clippers lead the way in the NBA champion voting results for 2019-20, but the Milwaukee Bucks aren’t far behind. (Voters were asked for their top three most likely title teams, and we calculated a weighted point total).

What is the greatest advantage for each of the seven teams that received votes this season? What’s the biggest lingering question?

Greatest advantage: If not quite a requirement for winning a championship, having a big wing who can create his own offense and excel defensively has been a huge boost to teams’ chances. Since the most recent lockout, seven of the eight champions — all but the 2015 Warriors — have had one of Kevin Durant, LeBron James or Kawhi Leonard on the roster. With Durant unlikely to play in 2019-20 following his ruptured Achilles, I’d say four players qualify for this designation: LeBron, Leonard, Giannis Antetokounmpo and Paul George. The Clippers have two of those four players, and we haven’t seen a duo quite like that since LeBron and Dwyane Wade combined for two titles in Miami.

Biggest question: The answer is health, which will be a concern for every team and particularly for the Clippers, given Leonard’s past issues with a mysterious quadriceps tendon injury and George’s undergoing surgery on both shoulders this offseason. Besides that, I’d say the question will be how the Clippers deal with teams with quality size at power forward, including their co-tenants at Staples Center, assuming Anthony Davis starts at the 4. The Clippers’ best lineups will surely include George and Leonard at the two forward spots, but they could be forced to adjust by playing bigger with JaMychal Green at the 4 to deal with Davis, which would give them a little less mobility and floor-spacing by taking sharpshooting guard Landry Shamet off the court. — Kevin Pelton

Giannis Antetokounmpo’s secret sauce is how he responds to disappointment. After Milwaukee lost the 2019 Eastern Conference finals, Giannis sat silent at his temporary locker in Toronto. He didn’t say it, but you could feel his brain whirring. This is what Antetokounmpo does: He asks himself what went wrong and how he could’ve been better. It took 24 hours for reflection to set in, he said at exit interviews. He had to shimmy off the sadness and frustration. But then, he said, those emotions turned into fuel.

Antetokounmpo has had a busy summer: releasing his first signature shoe, playing for the Greek national team, attending the MVP ceremony. Videos surfaced on social media of him lifting weights with his brother and shooting 3-pointers with new teammate Kyle Korver. If Antetokounmpo is able to take the next step in his game — shoot a bit better and make a few more free throws — the Bucks will be scary. Yes, Eric Bledsoe and Khris Middleton must contribute. Sure, Milwaukee’s bench would be wise to pick up where it left off last season. But Antetokounmpo — the Bucks’ biggest and best weapon — sets the tone for all of that. And he knows it.

Biggest question: Last season, the Bucks were playing with house money, but that luxury of operating under minimal pressure is gone. The Bucks were the little engine that could: huffing, puffing, defying odds, winning games and proving doubters wrong. Milwaukee made it all the way to the conference finals before being eliminated at the massive hands of Kawhi Leonard and the Raptors. Then free agency came, and the Bucks have emerged as East favorites.

The question for Milwaukee now: How will the team respond to that new external pressure? The ramifications of this season are great. The Bucks have the free agency of their franchise star looming. Milwaukee has an excellent locker room culture. Led by Antetokounmpo, the team has the unique ability to wick away outside opinions. But those voices will get louder, and the Bucks’ culture must prove strong enough to not only endure it but also spin it into ammunition. — Malika Andrews

Greatest advantage: Size and versatility. Philadelphia is going to turn back the clock and roll out an enormous starting five featuring 6-foot-10 Ben Simmons, 6-foot-6 Josh Richardson, 6-foot-9 Tobias Harris, 6-foot-10 Al Horford and 7-foot Joel Embiid. That size will translate to a defensive identity. With the addition of an elite defender in Richardson on the wing and Horford and Embiid anchoring the frontcourt, the 76ers should jump from No. 14 into the top five in defensive rating.

Although there are questions about the Horford/Embiid fit, the addition of the former Celtic gives head coach Brett Brown an insurance policy when Embiid is out of the game. Philadelphia has the flexibility of putting Harris at power forward (his true position) to pair with Horford. The same holds true when it comes to moving Richardson to small forward, a position he has played the majority of the past three seasons.

Biggest question: The promise of this starting five comes with uncertainty about how it all works. Harris will revert to small forward, a position he has not played consistently since his rookie year. Horford is sliding back down to the 4. And although this group can defend, who will close at the end of games with Jimmy Butler and JJ Redick gone? In 12 2019 playoff games, Butler led the team in fourth-quarter scoring (6 PPG). — Bobby Marks

Stephen A. Smith contends that the addition of Anthony Davis and the re-signing of JaVale McGee offset the significance of DeMarcus Cousins’ injury for the Lakers.

Greatest advantage: The Lakers have two of the top five players on the planet in LeBron James and Anthony Davis. Both will come into this season incredibly motivated. James is fresh off having his playoff streak snapped at 13 consecutive postseasons. After missing a chunk of last season with an injury, he will be hungry to remind everyone that he is the best player in the game. Davis spent much of last season stuck in purgatory. Now he has a new team and new life.

With Kyle Kuzma and a veteran supporting cast of shooters led by Danny Green, the Lakers are built to make a deep playoff run. If James and Davis can stay healthy, there aren’t many teams — if any — that can match up with the Lakers’ duo.

Biggest question: The health of James and Davis is vital for the Lakers’ championship success. But the Lakers also have a lot of new pieces to incorporate this season, and chemistry will play a major role. Along with six new players who could be part of the rotation — not including whomever the Lakers pick up to help offset the loss of DeMarcus Cousins — the Lakers have a new coaching staff trying to make it all work. Frank Vogel replaces Luke Walton, and that means James will have to adjust to a new system for the second straight season, while Vogel will have to try to develop a rapport with James quickly.

There are a lot of moving parts, and a trip to China in the preseason accelerates the timeline. That said, the opening part of the schedule is favorable. The Lakers will want to get off to a quick start, or else Vogel and James could face early pressure. — Ohm Youngmisuk 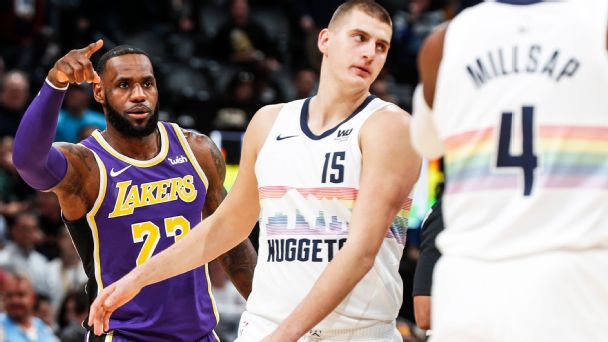 We polled ESPN’s panel of basketball experts for their predictions heading into the season. Over the next week, we’ll roll out the results here.

Greatest advantage: The Warriors return the foundation of a team that has been to the past five NBA Finals. Two-time MVP Stephen Curry and former Defensive Player of the Year Draymond Green are healthy and motivated to resume their roles as offensive and defensive anchors, and that shouldn’t be underrated. They also have chips on their shoulders to show that they can still contend after Kevin Durant’s departure and in the face of Klay Thompson‘s injury.

With D’Angelo Russell giving them a third All-Star-caliber player and the potential of a Thompson return by the playoffs, the Warriors could quietly be fielding four All-Stars who have a lot to prove just in time to push for a sixth straight conference championship.

Biggest question: Will Russell be able to maximize his production and coexist in this system? If he can give Golden State the offensive boost it needs as the secondary scorer and tertiary ball handler, the Warriors could be among the best teams in the league even before Thompson’s return. If not, the Warriors lack quality depth to maintain their spot at the top. — André Snellings

Greatest advantage: The Rockets rank at or near the top of the NBA in raw talent. Houston features two of the past three MVP winners with Russell Westbrook joining James Harden. GM Daryl Morey didn’t have to gut the team’s core to get a perennial All-Star to pair with Harden, parting with Chris Paul and future picks to land Westbrook, a significant upgrade in terms of production who has a lot more prime left than the future Hall of Famer he is replacing. Eric Gordon, Clint Capela, P.J. Tucker and Austin Rivers return as high-caliber, proven fits for a contender’s supporting cast. A historically elite offensive team added firepower.

Biggest question: Are the Rockets too combustible to be contenders? Westbrook is in Houston due in large part to a mutual desire to play with Harden, but there are questions about how the former Thunder teammates will mesh now that they’ve developed into the league’s two most ball-dominant stars. There could be some hard feelings to smooth over with the team’s key complementary pieces, considering that Capela, Gordon and Tucker are well aware that they were shopped in the summer trade market, particularly when the Rockets were pursuing a sign-and-trade deal with Jimmy Butler. And it appears that coach Mike D’Antoni will work under lame-duck status after occasionally contentious discussions about extending his contract beyond this final year of his deal broke down twice over the summer. — Tim MacMahon

Greatest advantage: The Jazz aren’t a superteam in any traditional sense, but with their offseason, they’ve built a super team. Depth was something of a question for Utah last season, but now it’s an expected strength. There’s a balance to the roster and a talent base that hasn’t been there in the past. A large amount of the potential still resides in Donovan Mitchell‘s evolution, but having Mike Conley should both ease the pressure of that and possibly accelerate it.

The Jazz have always been a stout defensive team, and that will almost assuredly remain the case. But with an uptick in shooting, scoring and creating, they are more of a true two-way team than they’ve been under Quin Snyder.

Biggest question: How well will the Jazz integrate their new pieces and shift their identity (at least a touch) in the process? Mitchell will face some adjustment playing with Conley, and he will need to develop more as a catch-and-shoot threat. The Jazz will miss Derrick Favors‘ physicality and will rely heavily on Ed Davis plus small lineups with Jeff Green. The Jazz are built to endure an 82-game schedule, but the postseason will offer new examination and test their adjusted approach. — Royce Young