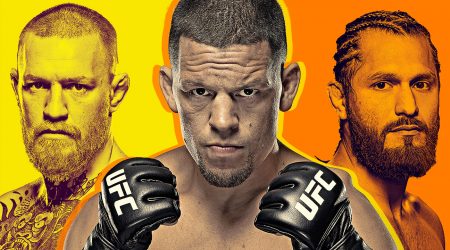 After defeating Anthony Pettis by unanimous decision at UFC 241, Nate Diaz stood inside the Octagon for his postfight interview with a name ready to call out for his next fight. But that name wasn’t the one most MMA fans expected — Conor McGregor. Instead, it was the man just months removed from recording the fastest knockout in UFC history — Jorge Masvidal.

Diaz has two unique opportunities to pick from. A trilogy bout with McGregor — a fighter who has been part of four of the five highest-selling PPVs in UFC history — or a matchup with ‘Street Jesus’ for what Diaz called “‘the baddest m—– f—– in the game belt.”

The UFC’s return to China features a strawweight division championship fight, one that fans in Shenzhen have been anticipating for several months.
Zhang Weili, who is 19-1 and fights out of Beijing, will look to take the title from Jessica Andrade in the Aug. 31 main event.

Brett Okamoto, Marc Raimondi and Jeff Wagenheim offer their take on what fight they’d most like to see for Diaz and how it will impact the other in the discussion.

Raimondi: It’s funny, because I wasn’t thinking much about Diaz vs. Masvidal until Diaz brought him up after his impressive win over Pettis. And then I had that eureka moment — yes, of course, this is what we’ve all wanted all along. What a fight that would be. Don’t get me wrong. I still want McGregor vs. Diaz III and I believe that will still happen down the line, but right now nothing makes more sense than Diaz vs. Masvidal.

Consider this: UFC welterweight champion Kamaru Usman will almost certainly be defending his title next against Colby Covington. That would leave a very interesting title contender between Masvidal and Leon Edwards. But Masvidal was never truly into that idea. So why not Diaz vs. Masvidal? The coolest thing about that potential fight is that both have been at this for so long, yet they have just reached the peak of their respective popularities now, more than a decade after they became professional fighters. It’s a great story.

As for Conor McGregor’s next opponent, Justin Gaethje and Donald Cerrone are facing off next month in Vancouver in what should be an absolute barnburner. The winner gets the golden ticket of fighting McGregor in his return bout.

Neither Gaethje nor Cerrone is in title contention right now. Tony Ferguson should be next for the winner of Khabib Nurmagomedov vs. Dustin Poirier for the title on Sept. 7. The winner of McGregor against the Gaethje-Cerrone victor could get the next title shot. If it’s McGregor, he can fight for the title or fight the Diaz-Masvidal winner.

Part of me wonders, though, how the Nurmagomedov-Poirier result will affect how this all plays out. If Poirier is lightweight champion, will McGregor try to jump back into the fray and be his first challenger? We also know he wants that Nurmagomedov rematch. Could the UFC do Ferguson dirty again? I guess we won’t know until we see how UFC 242 on Sept. 7 plays out.

Okamoto: Nate vs. Jorge … and it’s not as close as I thought it would be. For me, it’s about two things. First off, these are just two OGs of the sport. Diaz has been fighting in the Octagon since 2007, Masvidal since 2013 (and he was a fixture in Strikeforce prior to that). They were late bloomers in the sense of turning into stars, but they’re stars now.

And as much as I would love to see McGregor return to the sport, and return to the champion he once was — right now, it feels like anything he touches turns into an instant circus. So, I prefer the OG matchup for Diaz. The cult of Diaz vs. the cult of Masvidal, in prime-time.

What would that mean for McGregor, then? How about the winner of ‘Cowboy’ Cerrone vs. Justin Gaethje on Sept. 14? Done.

Wagenheim: Give me Diaz vs. Masvidal, and give it to me not inside the Octagon but somewhere deep in the 209 in a sun-baked (or otherwise baked) backyard. Why not? These two guys are the No. 1 and No. 2 contenders in the “Fun Fight Division,” so let’s have us some fun.

McGregor is always Mr. Entertainment, too, but he’s an ex-champ-champ who belongs in the “Vying For A Title Fight Division.” Sure, a Nate vs. Jorge winner could end up getting a shot at the welterweight belt — you know how the UFC operates — but a showdown between those two bad boys would most pointedly add to both of their trophy shelves the belt that matters most, the money belt, while making the winner the world champion of street cred.

McGregor has made a career out of chasing the next challenge. That’s how he rocketed to the top of the sport. And after he hit a speed bump in the form of a Diaz choke, the only fight he would accept was another shot at Nate. Conor’s self-belief is so indomitable that he may have been the only person on earth who thought he could outbox Floyd Mayweather. That carnival act made him a rich man, though, and now we get to see if he’s still the same man as he was when he was a paycheck-to-paycheck plumber’s apprentice. If he is, what he now wants more than anything else is another shot at Khabib Nurmagomedov.

If the smothering Dagestan gets past Poirier in two weeks and hangs onto his belt, Conor should take a fight that would qualify him for a chance at redemption. Yeah, the Irishman has the sway with the UFC to get his rematch right away, considering that not long ago the promotion was willing to hand a ridiculously undeserved title shot to another cash cow, WWE superstar Brock Lesnar. But because this is my matchmaking, I am going to make McGregor earn it, like he used to do so eagerly. I’m going to book him for a date in the cage with Tony Ferguson. You in?

If Diaz faces Masvidal, who has more to gain from the win?

Okamoto: Masvidal would have more to gain. As amazing as 2019 has been to Masvidal — I would argue no fighter in the sport has improved his notoriety and reach more than him — Diaz is still the A-side here. Hanging a win over Diaz, one of the top stars in the UFC, would be a massive boost for Masvidal’s mainstream appeal. And he’s already close to title contention as is, so a win over Diaz could easily land him a title shot.

Raimondi: Diaz. Masvidal has been in the thick of the welterweight title hunt for a bit now. Look at his résumé over the last few years. While Diaz was out of the picture following his loss to McGregor at UFC 202, Masvidal has beaten Cerrone, Darren Till and Ben Askren. All of them were top-10-caliber welterweights at the time. So we know how good Masvidal is right now.

People were already talking about a title shot for him next. We didn’t know how good Diaz was in 2019, after not having fought for three years, until he beat Pettis. Even then, Pettis is a career lightweight (who fought as low as featherweight) in his second UFC bout at welterweight. It was an excellent win for Diaz, to be sure. But if he beats Masvidal, too? Wow. Then we might be talking about the best version of Diaz we’ve ever witnessed.

Wagenheim: Diaz is already MMA’s biggest star this side of the River Liffey. A win over Masvidal would only add to a legend that didn’t lose any steam during his three-year absence. As for Masvidal, he’s coming off a pair of high-profile KO victories plus a backstage delivery of a three-piece and a soda, but even though he’s been in this game for nearly 50 pro fights over 16 years, his popularity has more of a flavor-of-the-week feel to it. With a lackluster performance against Nate, Jorge could fall back into the pack. This fight could be an opportunity for “Gamebred” to show he’s a thoroughbred.

Has Conor McGregor hurt his stock by not returning at this point?

Okamoto: McGregor has not hurt his stock in terms of interest. The minute he returns, he will still be the sport’s biggest draw, by far. I don’t think sitting out has had any negative impact whatsoever on that. The narrative around him, however, has changed quite a bit in the last three years. His legacy is different from what it used to be. How fans view him, I think, is different. Even what we have come to fundamentally expect from him is different.

Raimondi: For sure. By not returning and by all the trouble he has gotten into outside the Octagon. MMA moves incredibly quickly and McGregor has fought in MMA just once since 2016. Now, he is still a massive star by all accounts and he can rebuild himself with his mouth rather easily — better than anyone has been able to do before him. Look at how popular Diaz was at UFC 241 despite his three years away. Diaz didn’t have the arrests, the alleged striking of an old man in a pub or the reported sexual assault investigation hanging over him, though.

Plus, last year McGregor threw a dolly through a bus window, engaged in a rancid war of words with Nurmagomedov, lost the bout via finish and got into a postfight melee at T-Mobile Arena. Those are our last memories of him. That is considerable baggage (with some tarnish to boot) and he’ll be carrying it with him the next time he’s attempting to promote a UFC fight to a wide audience.

Wagenheim: It’s not so much his absence from the Octagon that concerns me as what he’s done with his time. The devil is in the details. The 5 a.m. altercation outside a Miami Beach club was with a fan. Clip a pestering paparazzi, fine, but don’t mess with your fans. The reported sexual assault investigation is centered in Dublin. And so was the videotaped run-in at a pub, which looked bad for McGregor even before he allegedly lifted a hand. The most famous athlete in all of Ireland walks into a pub in his hometown, buys a round of whiskey for the house and someone shuns him like a turning tide? Wouldn’t happen to Shane MacGowan.