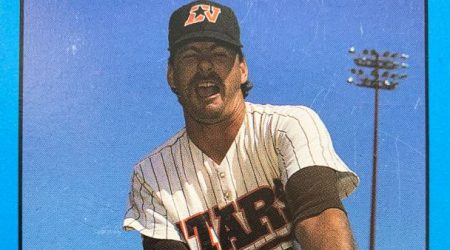 THE FUNNIEST BASEBALL CARD EVER MADE

“You’re the guy with the ball to the crotch” … Some players are remembered for their greatness on the field. Others are remembered for a singular moment that defined their entire career. Keith Comstock is remembered for a single image during a minor-league photo shoot for the Las Vegas Stars, in which he grimaces while a baseball hits him in an extremely sensitive area. Considering the number of steps involved, it’s a miracle that photograph ever made it onto a baseball card. We got Comstock himself to tell the story of how it all came together. Read more

The best of the rest … Billy Ripken’s “F— Face” card. Oscar Gamble’s majestic haircut. Mickey Hatcher’s giant glove. If you’ve seen them, there’s no way you’ll ever forget them, and each one has a unique and hilarious story. We’ve got the inside story of the 10 best in baseball history. Read more

THINGS TO CARE ABOUT

XFL team names revealed … There’s a grand XFL tradition of exceptional names — one only has to say the words “He Hate Me” to conjure up the entire aesthetic experience of the original league. The revived XFL is continuing this tradition with the names of its inaugural eight teams, which toe the line between ridiculous and awesome. Our personal favorite: the St. Louis BATTLEHAWKS. Read More

An awkward memo … We’re just gonna play this one as straight as possible: MLB has sent out a memo to its players that warns of the possibility of over-the-counter sexual enhancement pills containing PEDs, and that players would be subject to discipline even if they inadvertently ingested a banned substance. Seriously. Read More

Larry Bird’s tattoo parlay … Larry Bird wants to get one thing straight: He does not have any tattoos. That’s why he was less than pleased with a mural of him on an Indianapolis building, replicating a magazine cover from his college days with one key difference: He’s covered in tattoos that include a cardinal on his cheek and two rabbits mating on his right arm. The artist who painted the mural has agreed to remove the tattoos, with one exception: She’ll be leaving “Indiana” on his left arm. Read More

Experience MLS like a die-hard fan … Soccer is growing in the U.S., and when you see the atmosphere at a typical match, you’ll be a believer. Fan culture in the league is developing at a rapid pace, and if you’re in the middle of an intense Rivalry Week match (or if you’re watching one on ESPN+ this week), it’s something else. Need a primer on one of the most intense spectator experiences in sports? We’ve got you covered. Read More

Baker Mayfield says that his comments regarding Daniel Jones were taken out of context and blown way out of proportion.

Max Kellerman disagrees with Odell Beckham Jr’s claim that he was sent to Cleveland to die and argues he was traded to a better situation.

“If I were 25, if a goalkeeper is worth €75m, a player that does and has done what I have done in recent years has to have a value of three or four times that, easily, but I no longer have that desire.”

— Cristiano Ronaldo, on how much he’d be worth in today’s market. Read more

On this date in 2017, the Cleveland Cavaliers made a blockbuster trade, sending Kyrie Irving to the Celtics in exchange for Isaiah Thomas, Jae Crowder, Ante Zizic and a draft pick. The Irving era in Boston began with quite a bit of promise, but injuries and dysfunction hamstrung the team, and Irving left in free agency to the Brooklyn Nets this offseason.

Giants at Cubs (2:20 p.m. ET, ESPN+): They may be hovering around .500, but the San Francisco Giants are still very much alive in the National League wild-card race. In fact, they’re not all that far behind the Chicago Cubs, who are hoping they can make the whole point moot by winning the NL Central.

ACC Network launch (7 p.m. ET): The day is finally upon us, ACC fans. Your network is here. What can one expect from aforementioned channel devoted to your beloved conference? We’ve got your viewers guide right here: Read more

Sporting Kansas City vs. Minnesota United FC (9:30 p.m. ET, ESPN/ESPN Deportes): The loudest supporters’ section in MLS clashes with the best home stadium experience in this Rivalry Week matchup. It’s a special match for Minnesota’s Ike Opara, who has shored up its defense after becoming the odd man out in Kansas City.