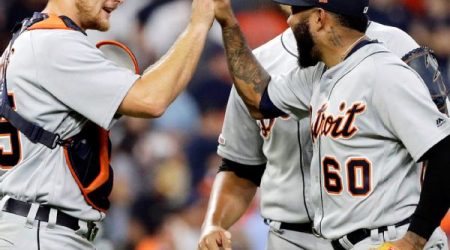 For the second time in two weeks, the Houston Astros lost as historic favorites with Justin Verlander on the mound, helping sportsbooks to a profitable night Wednesday.

Despite closing as +435 underdogs at Caesars Sportsbook and managing only two hits off Verlander in their 2-1 victory, the visiting Tigers pulled off the largest upset in the majors in the past 15 years, according to sports betting database BetLabsSports.com.

Just 10 days ago, the Astros were -460 road favorites over the Baltimore Orioles (+390). Houston lost that game 8-7, in what prior to Wednesday was the largest upset since the Washington Nationals beat the Minnesota Twins as +395 underdogs in 2007.

On Wednesday night, Houston closed as a -560 favorite at Caesars and as high as -600 at MGM and FanDuel.

“We took a couple of straight bets on the Astros and a slew of parlays over $500 that had either the Astros money line or run line on them,” Caesars director of trading Jeff Davis told ESPN.

Westgate Superbook also said it did well, taking a bunch of -1.5 run-line bets on the Astros at over -200.

Verlander retired the first 14 batters he faced, with six strikeouts, before Ronny Rodriguez homered with two out in the fifth. The veteran right-hander set down another 10 straight before John Hicks connected to lead off the ninth, sending the MLB-worst Tigers to just their 38th victory of the season.

“That’s the biggest win for us in a long, long time, especially against a premium team like that, a World Series contender and Verlander on the mound,” Tigers manager Ron Gardenhire said.

Betting big underdogs has been a profitable strategy in Major League Baseball.

Over the past 15 seasons, 19 teams have been at least +345 underdogs. Those teams are now 10-9 in those games. The Astros have now been the biggest road favorite (Aug. 11) and the biggest favorite anywhere (Wednesday night) in the past 15 years, losing both.

On Thursday, Houston, with Gerrit Cole to take the mound, opened as a -500 favorite at Caesars, which would be the second-highest line in the past 15 years.

Information from ESPN’s David Purdum and Ben Fawkes was used in this report.